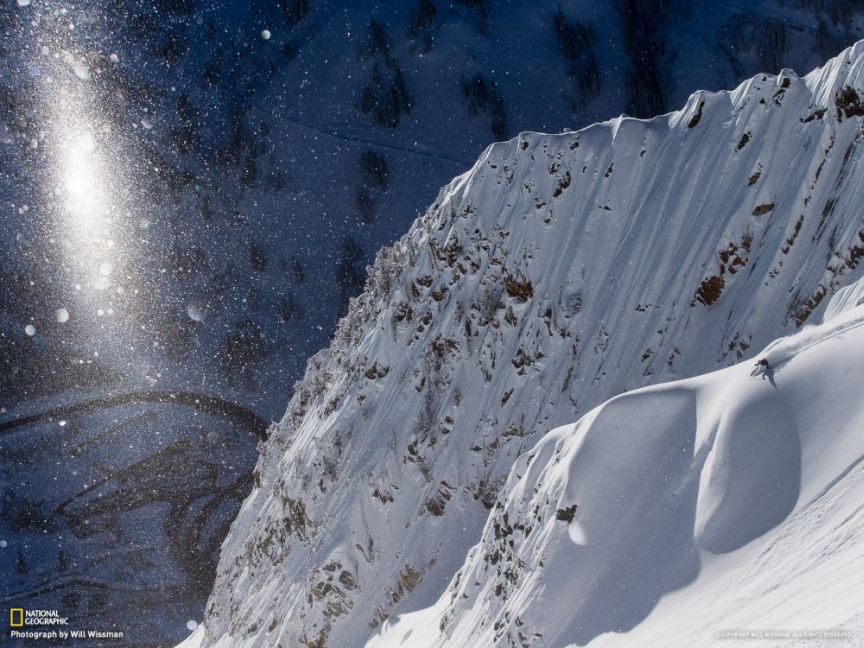 A photographer's dream—that’s how top ski photographer Will Wissman describes the day he made this picture with ski mountaineer Caroline Gleich.  “I have skied Superior nearly a hundred times, and this day would be in the top three for snow conditions.  It was deep, light, and stable.

I contacted a few of my most trusted backcountry skiers for a Superior shoot, including Caroline.  She is a seasoned pro with heavy avalanche safety credentials.  I knew I could count on her to make the right decisions, Wissman says, adding that this was of particular importance due to the treacherous conditions of the 2014 season.

As the two veterans worked their way down the mountain, a phenomenon revealed itself.  When it's cold with bluebird skies in the Wasatch, it’s a fairly typical phenomenon to see something I call the ‘sparkle effect.’  If you get the angle just right, you can capture it.  Shooting from the ridge of Superior, where he could capture the line Gleich choose, Wissman knew he had a dramatic angle.

The sun was in the perfect location to make the ‘sparkles’ come to life, recalls Wissman.  The eastern flank of Superior was lit up while the base area of Snowbird was still shaded, giving the photo depth and contrast.  I spent a total of 40 minutes navigating through deep snow and pepper rock in order to find my angle.  As Caroline slid into my frame, I knew instantly we had nailed it.

Select the photo for the large version.