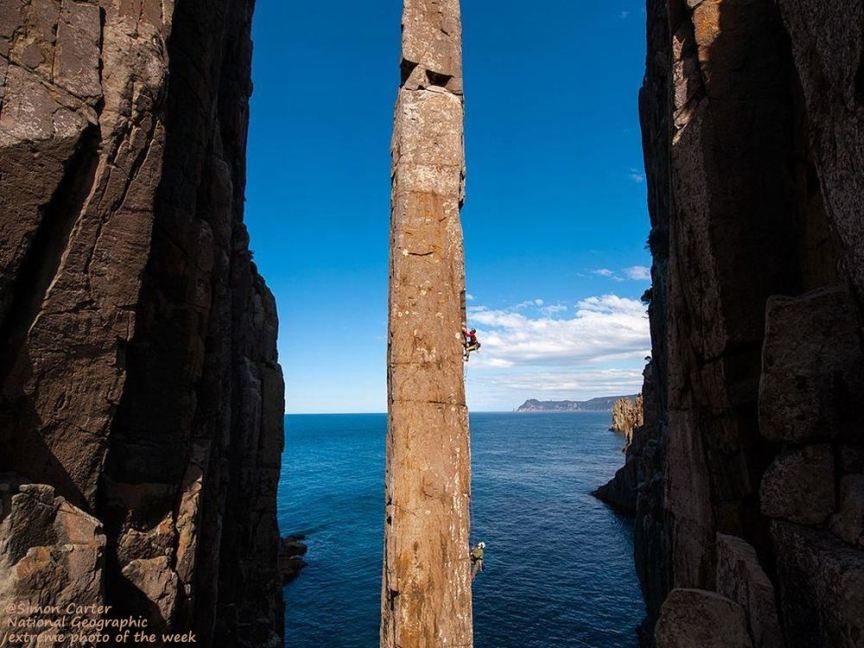 Australian climbers Doug McConnell (leading) and Dean Rollins (belaying) are seen on the Totem Pole, a slender 215-foot-high dolerite column that has long fascinated rock climbers.  Located at Cape Hauy on the Tasman Peninsula, it is tucked between the Candlestick, a 361-foot-high island (to the left) and the mainland.

We initially went out because it was the 40th anniversary of the first ascent in 1968 by the legendary John Ewbank and thought it would be fun to repeat his aid route, recalls Rollins.  It is an amazing piece of rock, and the climbing is of a high quality and quite committing in nature.  No one had free climbed the Totem Pole by this route before—when we realized we could do it, despite our injuries, it gave us even more motivation.

The pair spent 15 days working on the route over several months.  Just getting to the spire involved a hilly, two-hour hike and nearly 200-foot rappel to the base of the spire.  Once there, the Southern Ocean dished out some pretty challenging weather.

One of the reasons it took us so long was that conditions were often not ideal.  Some days were very, very windy.  And on others the rock was damp and seeping, so we wouldn't make much progress, recall Rollins.  And if the swell is up and you're close to the water level, every now and then a wave will smack you.

The slender Totem Pole has been part of photographer Simon Carter’s life since 1994.  I’ve spent more than 20 days photographing climbers on the Totem Pole.  I was keen to photograph Doug and Dean because their ascent of the original Ewbank Route was the first really new thing to be achieved on the Totem Pole in many years, says Carter.

To get his shot, Carter rappelled 30 meters from the cliff opposite the climbers.  I had in mind to try some different compositions and came up with this, he recalls.  In addition to standard climbing gear, Carter uses a chest harness. I can lean right out on the rappel rope and still hold the camera steady.

Though Totem Pole offers an ideal location for incredible images, photographers battle lighting in the area.  It still surprises me how small the window of light is on the Totem Pole, says Carter.  No sooner than the shadow from the Candlestick is gone, then the shadow from the mainland (see on the right) starts to creep across the Totem Pole.  Climbers can only move so fast, and there can easily be delays, so it always feels like a bit of luck when it all comes together.