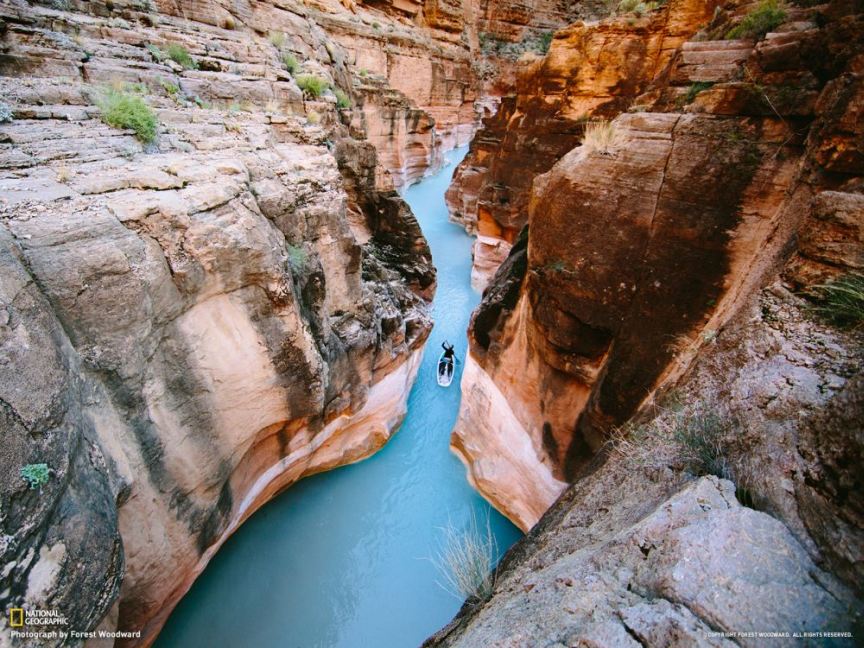 How could you not be blown away by that electric blue? says Sara Butterfield, a Whitefish, Montana-based ski instructor and rafting guide pictured here stand-up paddleboarding in Havasu Creek.  The 28-day Colorado River trip was her first time floating through the Grand Canyon.  It was great having the stand-up paddleboards with us—especially for instances like this where we could explore an amazing side canyon where rafts can’t go, says Butterfield.

Photograph by Forest Woodward:  It took me by surprise how vivid the water actually is in person, recalls photographer Forest Woodward, who was traveling with his friends and father.  His father had originally kayaked the river in 1970.  Seeing Havasu Creek for the first time immediately enchanted the photographer, but the group continued downriver to set up camp for the evening.  As soon as we tied up the rafts, I set off, searching around for a perspective, knowing some of the crew was bound to explore the canyon with paddleboards, says Woodward.

With a winter chill surrounding them, the group prepared with dry suits and Woodward decided the best perspective was above river level, even if that meant scrambling in a stiff dry suit.

I was drawn to this particular spot because of the sense of scale it lends to the canyon and the richness of the colors.  Lying on my stomach with the camera stretched out over the creek below, I was able to snap a few frames that I felt captured the sense of awe that we all experienced there, says Woodward.  He photographed with a Canon EOS 5D Mark III and a 14mm, f/2.8 lens.
Select the photo for the large version.